With the upcoming mi-bike Motorcycle Insurance Australian Superbike Championship, presented by Motul (ASBK) round running alongside the Repco Supercars Championship at Hidden Valley, we thought it timely to reflect on those competitors who have competed at the top level on both two and four wheels.

By any measure, the most successful racer across both disciplines of the sport was John Surtees, who took out four 500cc Motorcycle World Championships in 1956, 1958, 1959 and 1960, after which he immediately switched to Formula 1. It took Surtees little time to find his feet on four wheels; he finished second in the 1960 British Grand Prix.

By 1963, Surtees had converted his allegiances to the famous red hues of Ferrari, and won the F1 World Championship for the Italian manufacturer in 1964. Surtees, who passed away in 2017, remains the only racer to win World Championships at the very top levels of both two and four-wheeled categories.

Another British racer who achieved success on two and four wheels was Mike Hailwood, who won multiple motorcycle titles before switching to Formula 2 (in which he was European Champion). A return to motorcycles netted Hailwood victory in the coveted Isle of Man TT in 1978.

The likes of Barry Sheene and Johnny Cecotto are among the other internationals with accomplishments on bikes and in cars, but Australia has also produced its share of successful cross-category racers.

The Aussie who set a trend for others to follow was Gregg Hansford, who achieved top-three finishes in the 250cc and 350cc Motorcycle World Championships in 1978 and ’79, before returning home to race touring cars. Hansford drove Ford Sierras for Dick Johnson, Allan Moffat and Glenn Seton before swapping to Holdens with Larry Perkins in 1993.

The change of scenery yielded immediate success, Perkins and Hansford winning the Bathurst 1000 in ’93 and finishing third in ’94. Tragically, Hansford’s life was cut short in a Super Touring crash at Phillip Island in ’95.

Following in Hansford’s footsteps was Wayne Gardner, who enjoyed immense motorcycling success throughout the 1980s, highlighted by his 500cc world title aboard the Rothmans Honda in 1987.

Upon returning to Australia, Gardner landed one of the most coveted drives in the Australian Touring Car Championship, joining the factory Holden Racing Team for the 1993 season. While his debut car racing season was somewhat inconsistent, he ended it on a high note by finishing on the podium at Bathurst. 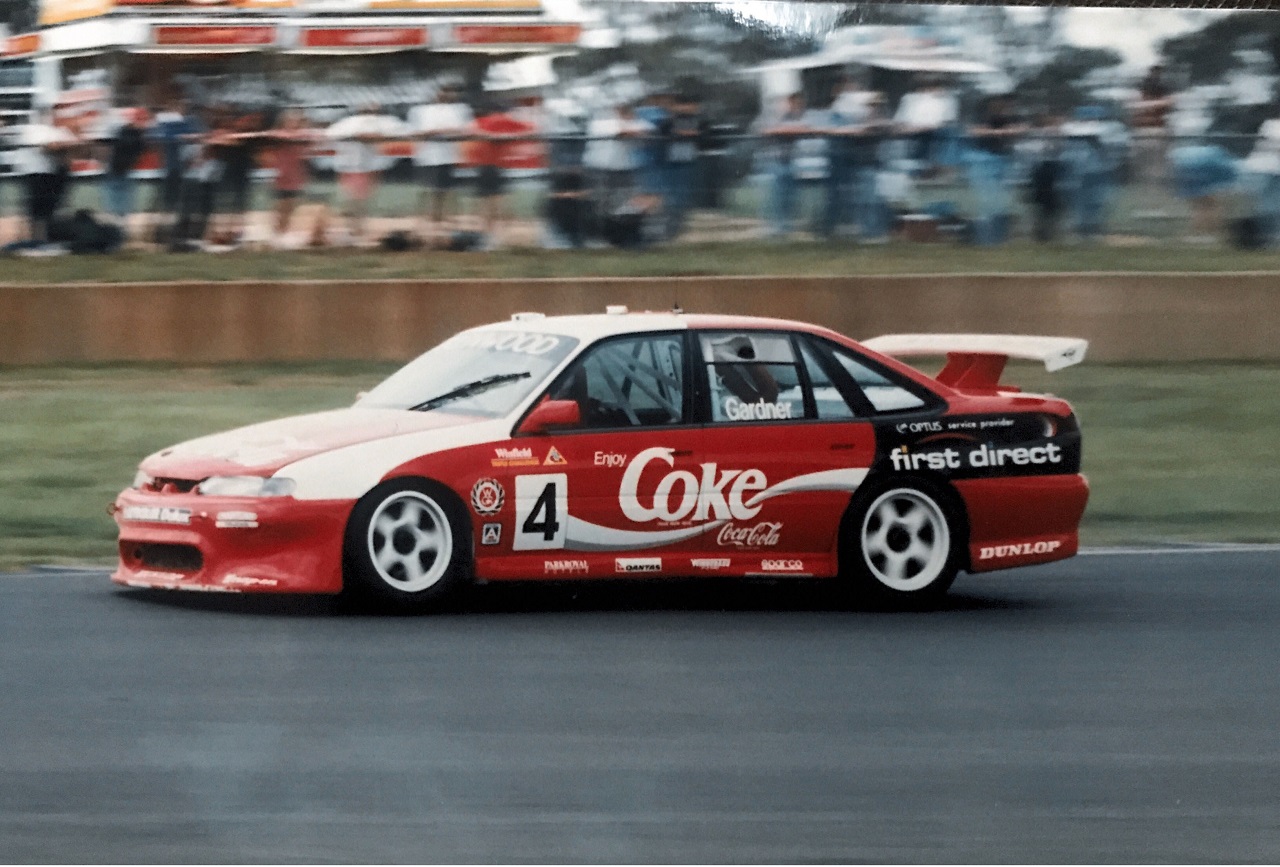 Gardner subsequently formed his own two-car team (with Coca Cola sponsorship), achieving another Bathurst podium alongside Neil Crompton in 1995, before shifting his attention to the All Japan Grand Touring Car Championship from 1996 onwards. However, he was still a regular visitor to Australia for the V8 Supercars endurance races and qualified on pole at Bathurst in 2000.

They may not have committed to full seasons of car racing like Hansford and Gardner, but Daryl Beattie (500cc World Motorcycle runner-up in 1995) and Troy Bayliss (World Superbike Champion and MotoGP race winner) are worthy of mention for their one-off Bathurst 1000 appearances, in 2002 and ’09 respectively. Beattie drove alongside Tyler Mecklem for the privateer Imrie Motorsport team, while Bayliss teamed up with Dean Fiore. Unfortunately, neither Beattie nor Bayliss made it to the chequered flag in their respective races. 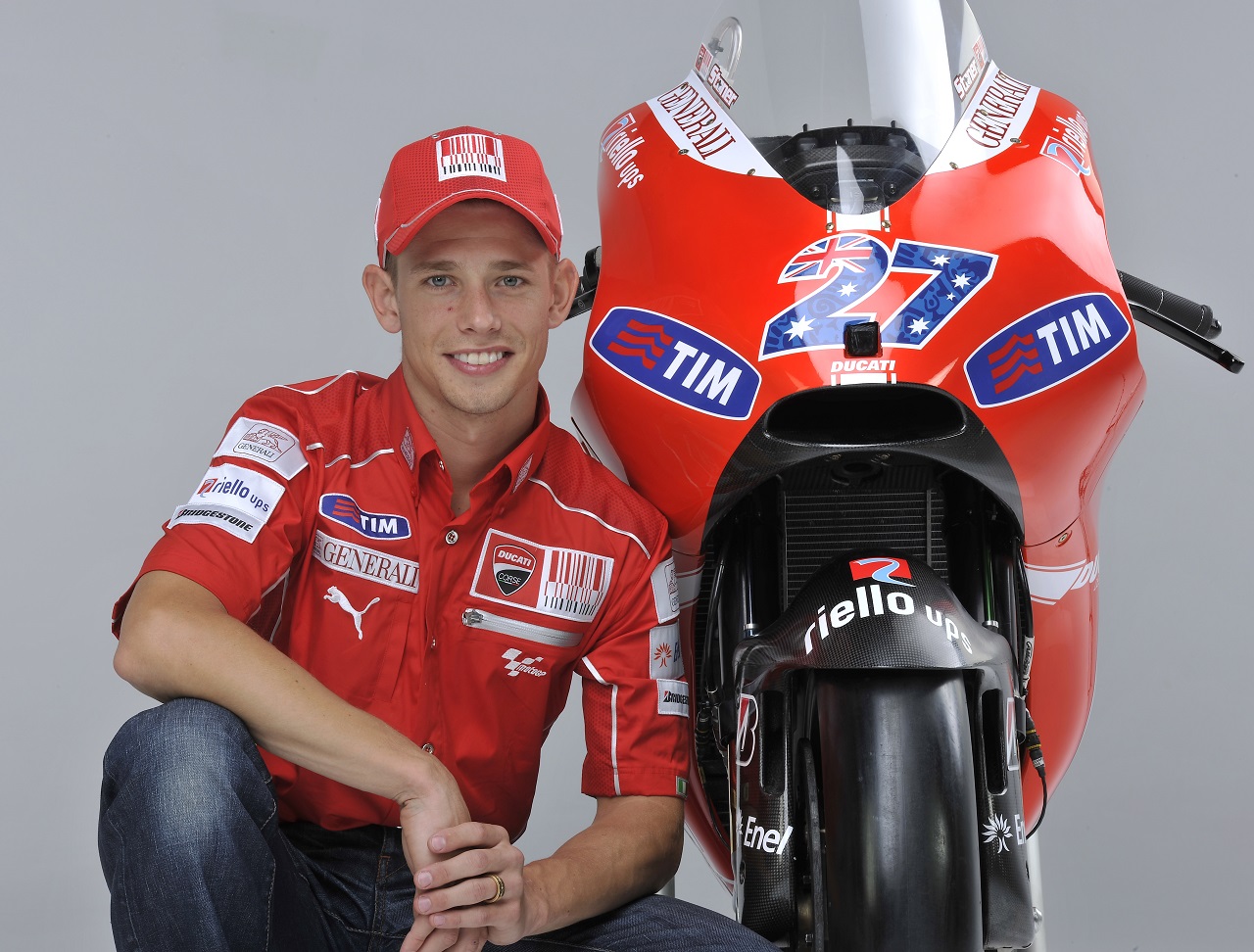 Casey Stoner’s results in MotoGP racing are well documented: 38 race wins, 39 pole positions, 69 podium finishes and two world titles in 2007 and 2011. In 2013, the lure of driving a former Bathurst-winning Holden VE Commodore for the dominant Triple 8 organisation proved too much for Stoner to resist, and he competed in the Dunlop Super2 Series.

Stoner demonstrated glimpses of potential, especially in qualifying, and achieved a best race result of fifth at Queensland Raceway, but called quits on his car racing endeavours at the end of the season.

Stoner is the most recent high-profile Aussie to compete at the top level of both bike and car racing, although it is also worth recognising Chris Perini – a former Australian Superbike Championship competitor – who won the Radical Australia Cup title in 2019.

Will we see any other racers making the transition from two to four wheels or vice-versa? Time will tell…