Driving out to the Wakefield circuit in light drizzle, the riders and teams must have been thinking about the unusual and potentially difficult day ahead for round three of the 2022 mi-bike Motorcycle Insurance Australian Superbike Championship, presented by Motul. The Racing Gods had other ideas and by the time the first bikes rolled out, the sun peeked through, and it was business as usual… 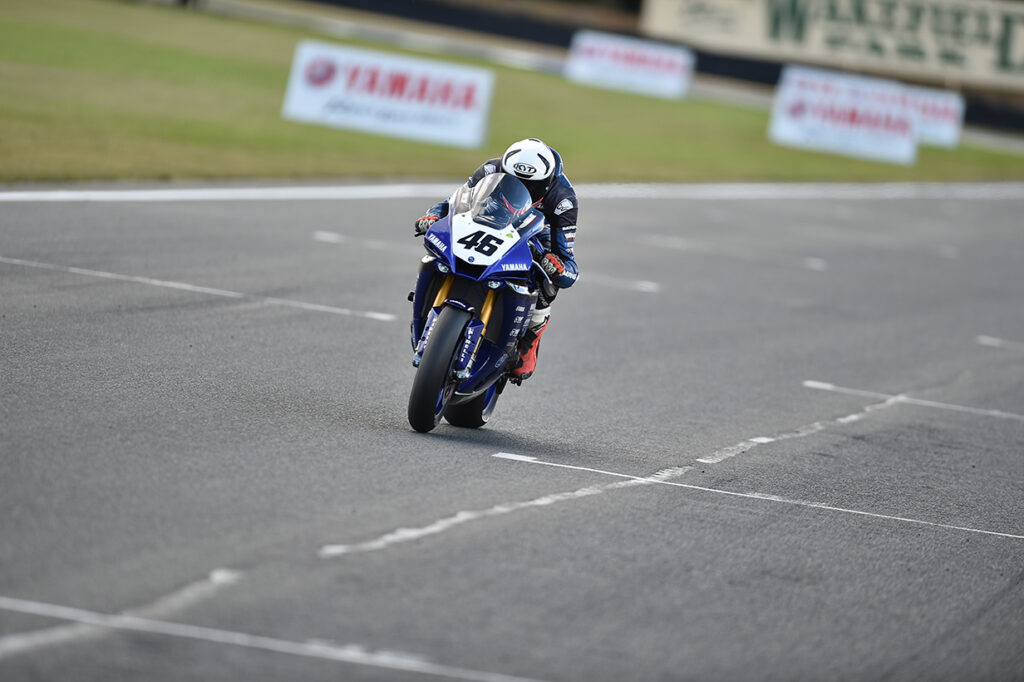 It was a very satisfied Mike Jones (Yamaha Racing Team) who parked his bike not long into the timed practice session as he went to P1 with a time just a few thousands of a second off Wayne Maxwell’s (Boost Mobile with K-tech) fastest time from Friday. Not only was he at the top of the table, but he also now knew he had the pace to run with the Ducati Panigale.

Where yesterday the questions were around the seemingly insurmountable gap between the #1 plate and the rest of the field, the question now was: “Can Jones win it?”

…or at minimum, can he take pole?

While Jones and teammate Cru Halliday (3rd in the session) completed less than six laps between them, Maxwell stayed true to his comments from yesterday and pursued some race -pace via 12 laps of the 2.2km Wakefield Park Raceway, putting in a fast lap to see his name second on the leader board behind Jones.

Troy Herfoss (Penrite Honda Racing) in fourth showed he’s just inching towards his regular podium standard, the only blemish a small crash late in the session.

Qualifying two for the top 12 competitors was a frantic and seesawing affair as Jones made a strong statement early and took the top spot. He chipped away, progressively going faster and faster. With teammate Cru Halliday (Yamaha Racing Team) also well-involved, the two blue boys were there to spoil the Wayne Maxwell party.

Try as he might, Maxwell could not pip the leading pair. Every fast lap he posted was bested by the Yamaha Racing Team lads.

Meanwhile, there was another log jam of riders from fourth through eighth with Staring, Waters, Sissis, Herfoss and Allerton all duking it out for a precious better grid position.

Mike Jones: “We closed the gap down to Wayne and now we’re the quickest today. We made a good step forward yesterday with the Yamaha team, we had a really good discussion about what we needed to work on and improve and we were able to come out and do that this morning.

“To do that in the timed practice session was one thing- there’s no real pressure there. But coming into qualifying, there’s a little bit of stress to get the job done, but we managed that.

“It’s been evident that the pole sitter here has not been able to pull away from the other guys. I think that will be the same tomorrow”

Cru Halliday: “I’d seen the pace that Wayne had yesterday and so we went to the softer tyre that everyone else has been using and it came good. We’re in two minds now about which tyre to use in the race.

“I just need to get decent starts- I’ve been practising them flat out and gone through a couple of clutches.”

Wayne Maxwell: “It’s not ideal, we’re definitely disappointed with this afternoon, so we will go back to what we had yesterday- possibly.

“I’ve got reasonable pace on both of the tyre options. It’s difficult to see what the pace is going to be. I think it will be 3-4 guys together and then maybe the last few laps when it gets hard we’ll see if someone can step up to the front and go from there.

“We have a reasonable package and we’ll be thereabouts…” 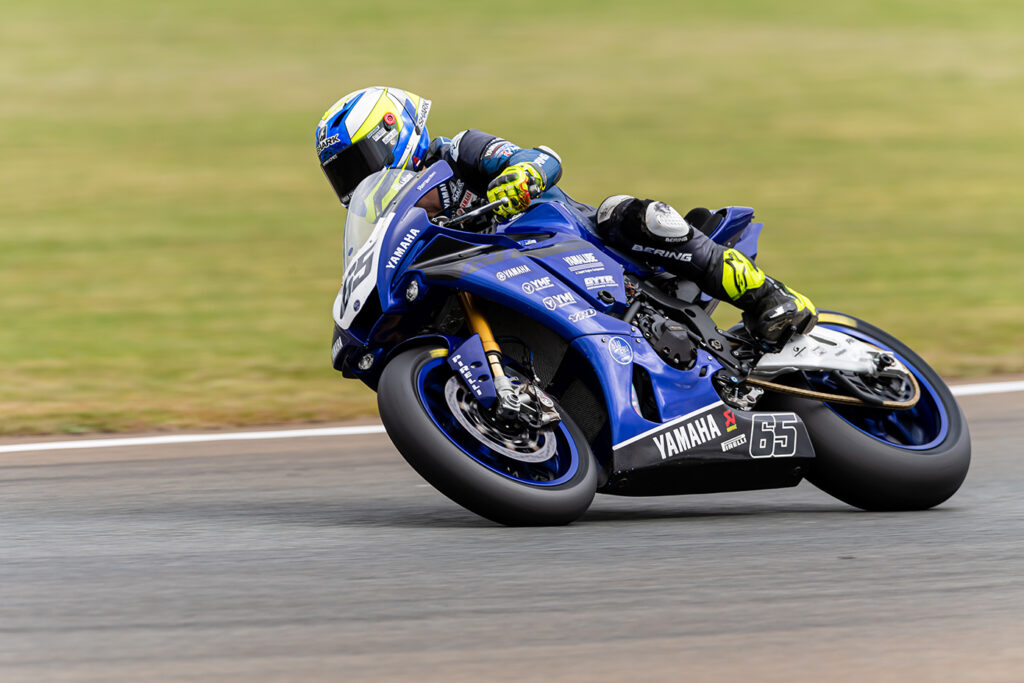 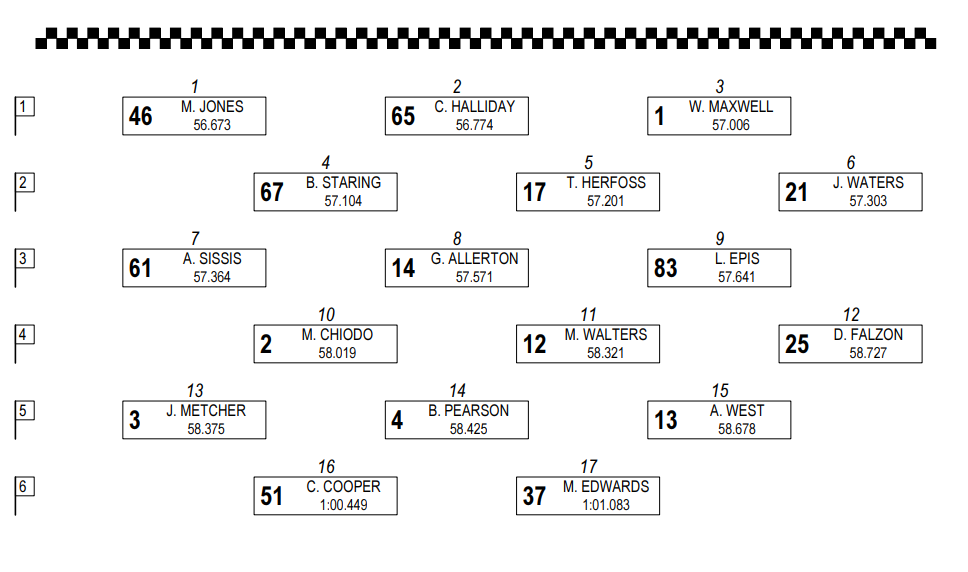 While the riders behind have changed and challenged, Condon has been able to just knuckle down each session and find the pace and consistency needed to nail down the fastest lap, on this occasion a 59.300 lap, some .162 ahead of second-placed Lytras.

Championship leader Olly Simpson took no part in the morning session and seems unlikely to participate any further this weekend after a heavy crash yesterday.

In session two Ty Lynch was able to take to top spot by just 9/1000th of a second, but on combined times the front row of the grid would be Condon from Lytras and Lynch.

While Condon is on pole, he is not planning on partaking in any other races this season, so the ever-improving John Lytras will look to not only take the race wins, but potentially the lead of the championship as well.

Snapping at their heels are several race-winning-capable riders in Lynch, Nicholson, Bramich, Drane and Skeer.

It’s an open race and promises much as we look forward to Sunday’s two races.

…and as for the championship lead; that’s even more open.

For polesitter Sean Condon, this event is a one-off as he rides in place of the absent Tom Edwards: “The bikes were sitting there and two weeks ago my uncle said ‘do you want to go and race Wakefield?’ and I said ‘yes!’

“I don’t really have any expectations- it’s been so many years since I was in this company. I’ve done a handful of ride days.

“I’m just gonna go out there and do my own thing and wherever I finish, I’m happy! I’m just happy to be back on the bike, racing again.” 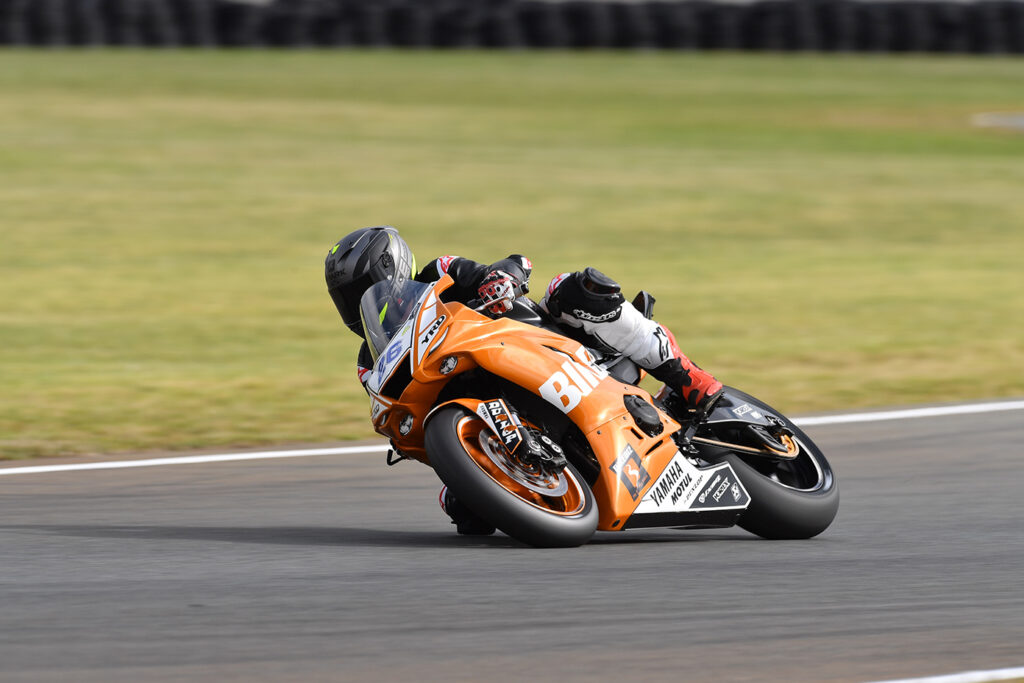 Cameron Dunker was a little late getting up to pace in qualifying one, but once out, normal business resumed and he ended the session in his familiar P1, but with a dramatically reduced margin to second-placed Glenn Nelson who was just .019 behind Dunker’s R3.  Hayden Nelson was third, just .185 behind.

In race one, while it was expected that Dunker could based on times alone, head off into the distance, Glenn Nelson was able to stay on terms with the polesitter. While Dunker was the man to follow, Nelson showed that in the Dunlop Supersport 300 class, race craft is more important than qualifying and he used every trick in the book to try to get around Dunker, but at the line it was Dunker first by just 5/1000th of a second with a sizeable eight-second gap back to a gaggle of riders: Jacobs, Aksu, Hayden Nelson and Swain. 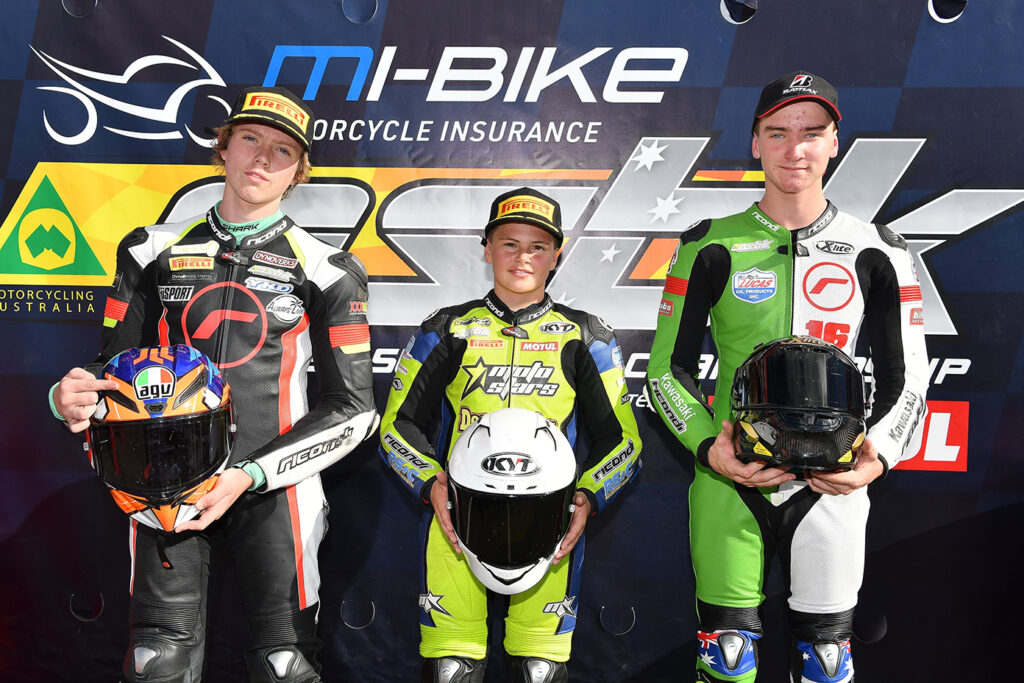 With a .6 second gap back to second, it was all about whether Dunker could break the shackles of towing around the other riders.

In race one, Dunker tried to slip the chain and head off into the distance. Glenn Nelson and Hayden Nelson grit their teeth and ducked low behind their screens and would not let Dunker get a gap.

At the midpoint of the race, the leading trio had ground out a five-second lead to guarantee that they would fill the podium spots, but the exact order was still up for grabs.

At the line, Dunker fulfilled his pace and promise by taking the win from Glenn Nelson with Hayden Nelson in third. 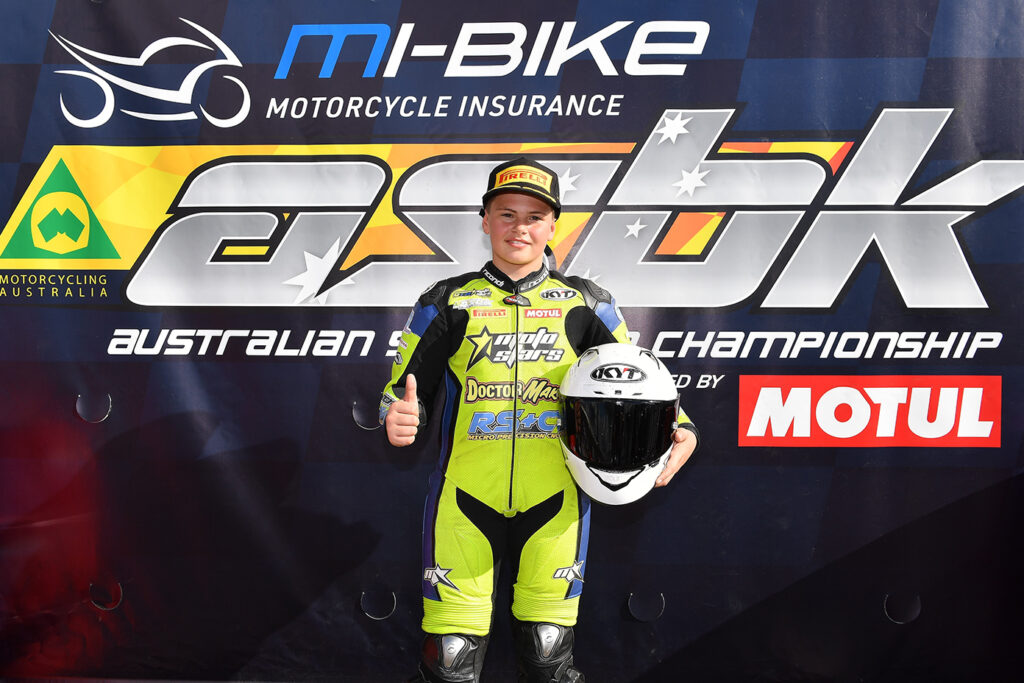 In qualifying one, Hudson Thompson’s seemingly unbeatable form took a hit when Harrison Watts put his R15 a scant .083 ahead. Marcus Hamod was just .158 behind the leader and .076 behind Thompson. It all added up to a must-watch race one.

..and it was. Five riders: Hudson Thompson, Harrison Watts, Marcus Hamod, Cameron Rende and Levi Russo all set sail for the finish line and were not taking passengers. This group were able to stretch their group lead while also fighting non-stop for the lead of the race. Trackside commentators Mark Bracks and Lachlan Mansell could barely keep up as the riders slipstreamed, dived in under brakes and otherwise diced for the lead. It was good, clean racing and it was riveting.

While the leading five were duking it out, some five or so seconds back another pack of six riders were similarly locked in combat. This group: Hunter Corney, Alexander Codey, Teerin Fleming, Sam Drane, Ryan Larkin and Bodie Paige also traded the lead of their group and as a result, were not able to get after the leading five.

As the laps ticked over, the leading quintet started to prepare themselves for the all-important track position for the final lap- and corner. As they rolled through the last corner, Harrison Watts was able to position himself perfectly and take the win from Thompson, Rende, Hamod, and Russo. 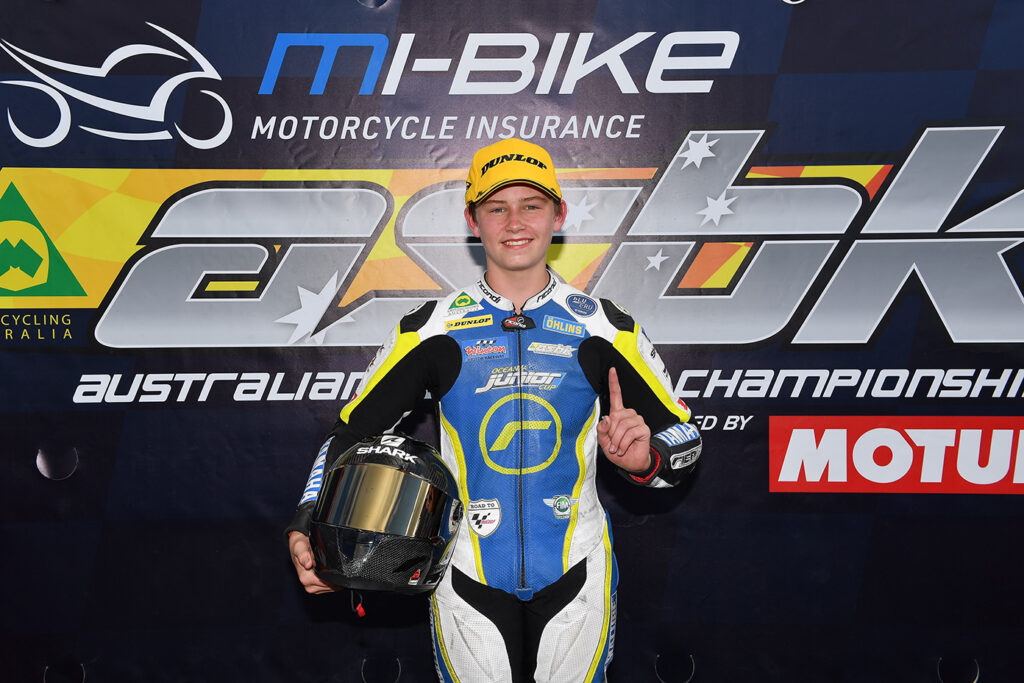 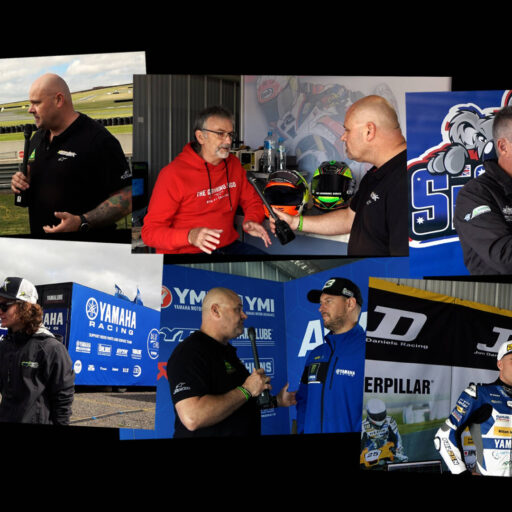